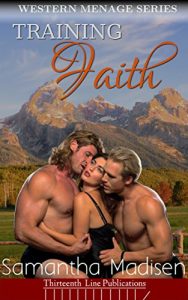 “Sophia’s right boys. Though I know you must be feeling the need to be with your bride again, we’ll never get her training underway in any proper way if we don’t start now. Though you have consumated in the traditional sense, you know the folks out in Red River will run you out of town if you haven’t both mounted her at once. That’s the Red River way.”

When bounty hunters Storm and Troy find Faith Weston, the train robber they’ve been hunting, it feels like their lucky day. But one look at her makes them realize that they’re not collecting anything but a bride, even if it means running from the law.

Luckily, their old friend Doc Jensen is not too far of a ride away. Not only is he a good friend of the Sheriff, but he knows the ways in which two men can properly train a woman to be their bride, especially a woman as unruly as the one they have on their hands.

Faith hasn’t ever had a real man in her life and doesn’t take easily to the cowboys demands. But with firm hands and the Doc’s guidance, the two men awaken feelings in her she’d never dreamed of and she soon finds herself craving the closeness of her strong protectors. That closeness is what she gets, but not in the way she expected.

When the men reveal the Red River tradition of sealing wedding vows, Faith doesn’t know if she can endure the humiliation of such a public display.