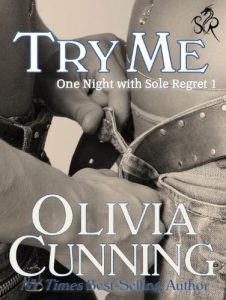 For the five sexy rock gods of Sole Regret, finding love is easy, keeping it is hard.

Melanie has no desire to meet the members of the rock band, Sole Regret, but her groupie of a best friend gets them both backstage and then rushes off with the band’s lead singer. Left alone at an after party with a bunch of scary tattooed and pierced metal-heads, sheltered Melanie is relieved when the only normal-looking guy in the room insists on keeping her company.

By the time Melanie discovers that Gabe is the band’s drummer and not as normal as she assumed, she has already made a complete fool of herself. She can’t help but be interested in him, not as a rock star, but as the sexiest man she’s ever encountered. Strangely attracted to his hidden tattoos and body piercing, she wonders what it would be like to spend a night with a bad boy.

Gabe is more than willing to show sweet Melanie there’s more to him than meets the eye. All she has to do is try him. Will they only share a single night of passion? Or will their hearts entangle as quickly as their bodies?

Contains explicit sex, graphic language, and a hot rock star with a naughty and inventive mind.