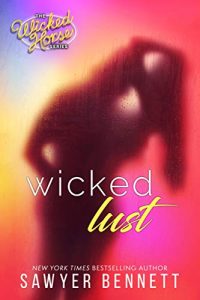 Cain Bonham is as big and bad as they come. After serving in the Marines, he’s returned home to Wyoming and now works as head of security at the exclusive sex club, The Wicked Horse. His job is to protect not only the patrons, but to zealously guard the secret existence of the club itself.

Sloane Preston is all about discovering secrets. As an undercover reporter, she’s determined to reveal the truth behind the facade of The Wicked Horse and expose it for all the world to see. She just didn’t count on her pathway into the club coming at the hands of one gorgeously scarred and bad ass bouncer who manages to easily possess her body and soul.

While Cain’s not looking for anyone to catch his eye, Sloane did it all the same, and he’s not bemoaning the fact that she’s as wickedly kinky as he is. As both get caught up in the sinful fantasies that only The Wicked Horse can create, secrets and loyalties will be tested and hearts will risk being broken.

**Warning: this book has sex in it. Lots of sex. Dirty sex. The Wicked Horse Series is a bit different than what Sawyer Bennett normally writes. While you’ll still enjoy fabulous characters, a suspenseful story, some witty banter and an epic romance, there’s just… a lot of sex. You’ve been warned.